BBQ Jack WHAT?!? If you’re thinking “She’s lost her mind.  What weird vegan food is she eating NOW?” bear with me!  Jackfruit, the young/unripened variety, is popular primarily in Asian countries.  It can be found in Asian grocery stores and is sold in cans.  It has a mild flavor and poultry-like texture.  I know it sounds weird; trust me, I was skeptical too, but it’s really good this way, and a heck of a lot healthier than pulled pork!  Can be made gluten-free when using a gluten-free BBQ sauce.

I enjoyed this dish off of the Seabirds’ vegan food truck and have done my best to recreate it here.  Tasted the same to me, only theirs was spicier (I’m a spice wimp so I didn’t use hot sauce). 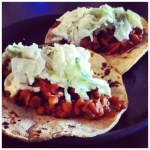 BBQ Jackfruit Tacos
Similar to pulled pork, this filling is served on corn tortillas topped with coleslaw. You could serve it on a bun instead but I love it on the tortillas. Add hot sauce to the pot if you like it spicy.
Ingredients
Servings: Makes 12 tacos
Units:
Instructions
Share this Recipe
Powered byWP Ultimate Recipe