Earlier this month, my daughter Cambria ran her first marathon (SO proud!).  She got the distance running bug from her boyfriend Will Milano, who has been an athlete his whole life.  They ran the race together, side by side the whole way.  Cuties!  Anyway, Cambria, now 21, has been plant-based/vegan since she was 14.  Will on the other hand, has only been eating this health-promoting diet for 6 months.  That is great and we are so excited he’s become so healthy, but what’s truly amazing is how much better he performed running this marathon as compared to the past five, despite training with much less vigor and consistency!!  I wanted to share my conversation with him. Just goes to show the body is meant to survive and thrive on PLANTS!  Congrats Willy! 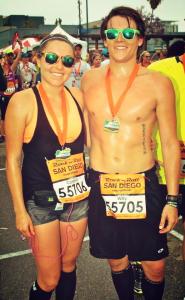 Willy and Cambria, just after they crossed the finish line. They don’t even look tired!!!

You went plant-based 6 months ago. What was your diet prior to that? Prior to going plant-based I would mainly eat animal products. My day would begin with something like steak and eggs, then more meat and milk throughout the day.  I would sometimes eat fruit, rarely eat veggies, but always had at least some meat.  Like an unfortunate many, I chose to mainly eat foods I thought were commonly found in the Paleolithic era. In hindsight, it seems ridiculous. I realized no one is truly on a Paleo diet. A diet from the Paleolithic era included the animal Glyptodons.  I don’t know anybody eating that today.  Also, Paleo-Indians only ate meat about once a month following a successful hunt, and they ate all of it. There was no to go boxes for later. No one in the Paleolithic era consumed meat every day like modern day Americans do.  Anyway, it just wasn’t working for me. It made my body feel sluggish and unproductive.  I was seduced by the diet because of what I believed I got from the large quantity of protein. I felt it gave me bigger and stronger muscles. For some reason this is what people want. Maybe its because you can see them in the mirror and feel a sense of accomplishment.  However, you cannot see your nerves, lymph nodes, heart or brain. They are all far more important than muscle is to being physically and mentally fit.

What is your typical diet now? People always ask me “if you don’t eat meat or dairy what do you eat?”  Well, my breakfast generally consists of a smoothie or oatmeal. If I have time at lunch I will make some type of a stir-fry with potatoes and veggies. Throughout the day I snack on fruits, veggies and nuts. I even splurge with peanut butter and jelly sandwiches, or I’ll make a vegan pizza. Dinner is a balanced meal of pasta and veggies, maybe a bean and veggie burrito, etc. If money was no object I would eat a Chipotle burrito every day.  I just add everything they have to offer, minus the cheese and sour cream, and substitute the meat with black beans. I stay away from their pinto beans – they make them with bacon…crazy right?  If I am in the mood for desert I will have fruit or some coconut milk ice cream for special treat. Now, I’m getting hungry…

What was your biggest challenge, if any, going plant-based? I originally set out on the diet for the purpose my own scientific research. I wanted to discover for myself what the hype was all about. The first 3-4 weeks were easy. Then amazing things started happening. Watching the food network wasn’t the same. I began to see things differently. I no longer wanted to shove as much burnt flesh into my mouth as possible, like Adam Richman on Man V. Food. Milk was no longer a delicious treat. I made the connection that it was nutrition for baby cows derived from their lactating mothers, and not food for humans. The biggest challenge was learning that just about everything contains flesh or liquid from lactating mammals. I never suspected animal products in the bread that I loved so much, only to find out that it had whey added. Also if you go to Mexico, even if the waiter assures you its bueno, do not eat the rice. I guarantee it will contain pig lard.

For those who wish to try out the lifestyle, don’t trust anything at restaurants unless the servers understand what the term vegan means. Plus, be ready for criticism from closed-minded people. I love when my friends try to edify me and tell me I need meat to survive. I’ll ask them,” Why?” and watch them struggle with an answer. Nobody knows why. They simply adhere to eating meat because it is the norm. Or, my favorite, the myth that animal protein is the only form upon which to survive. Even though plants contain just as much if not more, and have tons of fiber, unlike meat and dairy which have zero.

You mentioned you trained harder for the marathons prior to this last one. In what ways was your training regimen different than this time? For previous marathons I followed a strict training regimen. I trained with a peak of 40 miles a week and one day would include a 20-mile run. I would follow it up with a two-week taper and stretch constantly. This marathon I was burdened with a terrible neck injury that occurred while working full time. I was unable to work or run from the injury. I couldn’t even sleep comfortably. The longest run I did was 13 miles. I was able to train short distances every day because my recovery was great. But I still lacked the miles that I had had in previous marathons.

In what ways do you feel differently, with regards to the marathon and training, than you did before going plant-based?  I have been training my whole life. Since I was 5 years old, I was on the swim team. I know what training well consists of. Before I was strictly plant-based, I would train every other day to allow recovery time. I would even allow two days of rest between weight lifting days because I would be sore for that long. After I went plant-based I would rarely become sore. If and when I did, the muscle soreness would come the same day and be gone in a matter of hours.  Also, my endurance has greatly improved. This plant-based marathon was the first one in which I was able to maintain constant running during, and after. I felt like I could have kept going beyond the 26.2! I was even able to walk the next day. It was by far the best I have ever felt during an endurance race. My girlfriend who accompanied me across the finish line at this marathon also claimed to have the same abilities during and after the race. While I have run 6 marathons, this was her first. She finished in the top 10% of girls her age and never ran more then 13 miles prior to the race. The only thing she did differently than the majority of runners was eat a plant-based diet for the last seven-plus years. This significantly helped her performance as well as mine.

I’m guessing you once believed, as most athletes do, that protein was the key to training.  What are your thoughts on that now? The question of consuming enough protein is slightly rhetorical. 100 calories of broccoli is equivalent to 12 grams of protein. 100 calories of meat is only about 8 grams of protein. You can do the math and imagine if people ate as much broccoli as they did meat. Before I started analyzing all of this, I didn’t realize how much excess protein Americans consume while eating such large amounts of meat. Most of the protein people eat passes through their systems because their bodies cannot absorb that much. Since I have gone plant-based I lost weight, but I have lost no muscle mass or definition. Plants contain more than enough protein the human body needs to stay strong and healthy, and unlike meat, they contain antioxidants.

Do you miss your old eating ways, and do you think you will ever fall back into them? I only miss the way I used to eat when I go out with friends and there is no item on the menu that is meat or dairy-free. Its times like these, while my friends are stuffing their faces, that I miss eating the fattest greasiest burger or bacon cheese fries. But, I have been enlightened and I now know those foods contain very little if any nutritional value, and cause great harm to the body, not to mention the suffering that took place for the animals. I’ll be honest, every once in a while I will crave something made from animals; however, when it is in front of me I don’t want it.

What would your advice be to a person wanting to train for an athletic event? I completed 6 Marathons including one full Iron Man Triathlon in the last two years. I know what aspects of training are required to be successful in endurance races. If you are trying to take your endurance training to the next level, try out a whole-food, plant-based diet and simply cut out as much of your fat, especially saturated, and oils as possible. You will see the tremendous improvement in recovery, energy, and state of mind. It won’t kill you! I have been doing it for 6 months now, even though I only set out to do it for 1. Before you knock it, try it. I gave up animal foods and became a faster, stronger, better athlete! “Nothing will benefit human health and increase chances of survival for life on earth as much as the evolution to a vegetarian diet.” (Albert Einstein 1921)