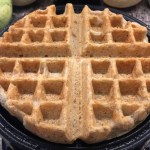 Waffles
If you love waffles but can't have gluten, and don't consume animal products or oils, this recipe is for you!! They are delicious and according to my family, you'd never know they were gluten-free - which is a plus since a lot of gluten-free things resemble cardboard!
Ingredients
Dry Ingredients
Wet Ingredients
Servings: Belgian waffles
Units:
Instructions
Recipe Notes

I make my own flour blend using 1.5 cups brown rice flour, 1.5 cups sorghum flour, 3/4 cups each potato starch and arrowroot, but I'm sure a store-bought variety would work just fine.  I haven't tried it though so...fingers crossed!  🙂