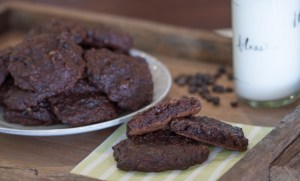 Soft, chewy, gooey and chocolatey – that’s what these cookies are. Best part is they are a sinful tasting treat without the sin (maybe just a little bit).  Of course there is no oil or butter in these little gems, but I also tried to keep the flour, sugar and fat low.  You’ll notice the recipe calls for 2 med-large bananas.  As such there is a very small banana taste…very slight though.  If you aren’t a banana fan (I simply cannot imagine!), try using only one banana and replacing the other with 1/2 cup applesauce.  I haven’t tried this so I can’t say exactly what the end result would be, but it’s worth a try. 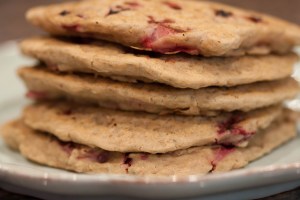 Farmer’s market had incredible organic strawberries, and it’s Sunday.  Seems obvious to me that pancakes should be created and consumed.  And so it was. 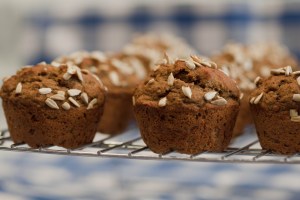