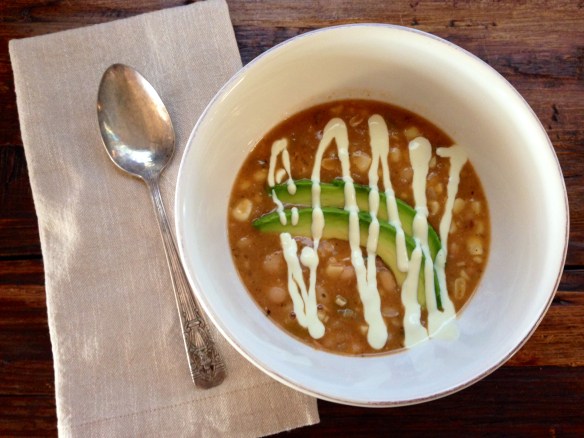 This is a recipe I’ve had on my website for a long time but I revamped it last night and it’s so much better now.  I recommend topping with a squeeze of lime, a drizzle of Sour Un-Cream and Cornbread Muffins ((find in Recipes).  Make sure to read the NOTES at the bottom of the recipe for important tips.

I’m not proud of this,  but when I was in junior high, I ate taquitos from the cafeteria nearly every day.  I don’t even want to think about what they were filled with, but I just loved them; mostly for the crunchy corn tortilla and the green dipping sauce with which they were served.  We won’t even talk about the Hostess mini crumb donuts I ate too.  Geez.  Gotta love the offerings in school cafeterias.  Sad to say it’s no better 30 years later.  Did I just say that?  30 YEARS?  “sigh”.

Anyway, I digress…sorry.   As we all know, traditional taquitos are deep fried.  We also know deep fried foods = bad news.  I set out to create a plant-based taquito that I could bake, but would still be crunchy.  I don’t cook with oil as a rule, but for form and function, a small amount was required for this to work.  I tried it without.  Fail.  However, I was amazed how such a small amount could make a difference.  1 tablespoon of olive oil or less for the entire batch of 12 taquitos.  Not bad.  Since these taquitos are filled with potatoes, I’m calling them paquitos.  🙂

Never have I made these when they weren’t loved by all.  When I first created them, I couldn’t decide if they should be called burritos or enchiladas.  Ultimately I decided they were a combination, hence the name “enchilito”!  Several of the ingredients listed are brand specific but I’ve no doubt these would still be delicious regardless of the brand.

Since I advocate a primarily whole-foods diet, I’ve listed the meat (Soyrizo) and cheese (Daiya) substitutes as optional.  While these foods are tasty, they are processed and contain oils.  Use them sparingly, if at all, and save them for situations in which you’re serving to a meat-eating crowd or if you yourself are slowly attempting to move towards a more plant-based diet.  This dish is plenty flavorful without those ingredients, but for the transition process, small amounts of mock meats and cheeses can be helpful.