Unlike traditional Sloppy Joes which are made with ground beef, these Josephines are made with either crumbled tofu, chickpeas or tempeh.  Either is delicious!

Chili.  Not the most creative dish, and almost everybody knows how to make it.  There are a gazillion recipes out there, and I’ve tried many of them (the ones without meat, of course). For whatever reason, I’ve never been completely satisfied with any of the chili dishes I’ve made, whether I followed a recipe or made it up myself.  I always felt like there was something missing, and I couldn’t describe or figure out what that something was.  Also, I always made it too spicy, and as I’ve said many times, I’m a spice wimp.  All this changed last night.  Finally!

The mushrooms and cauliflower may sound like strange additions but trust me, they work. You can’t really taste them but they add a nice texture and I’m sure contribute to the overall flavor.  The real secret in the great flavor, I believe, comes from the baked beans and liquid smoke.  The fresh corn is a great addition, especially now when corn is in season.  Add more chili powder and maybe some cayenne if you like your chili spicy.  Try it and let me know what you think. 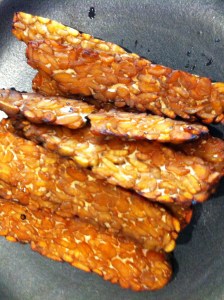