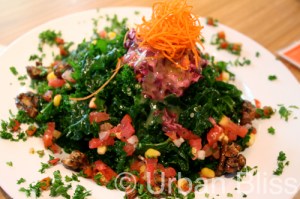 So, I bought 2 acorn squash to decorate my Thanksgiving table and they’ve been sitting on my kitchen counter ever since.  I finally decided to cut those bad boys open and do something with them.  What a favorable result!!!  If you are pressed for time, this isn’t the best dish to make, unless you omit the gravy….then it’s not bad.  The gravy on it’s own isn’t time consuming or difficult, but if you stick it in with the other steps for the squash, it adds up.

*If you’ve ever cut a raw acorn squash before, you know how difficult it can be. To make this process easier, next time I will roast the squash whole first, for maybe 10 minutes, then cut it in half, and finish cooking.  Not sure if 10 minutes is the magic number but the squash would have to be softer than when they went in!  Give it a try.  Without this step, the squash takes about 35 minutes to cook.  I prefer scooping out the seeds and stringy stuff after its cooked – it comes out much easier that way.

I came home from a 2-hour appointment that took place during the time I would normally eat lunch.  It was 2:30, I was grumpy and nearly passing out from hunger (ok, so I’m exaggerating a tad – but you get the picture.  I was HUNGRY!). I needed to put something together fast!  Anyone who knows me well, knows I do NOT skip meals.  If and when I do, it’s not pretty.  Sure, I could have shoved my fist in the peanut butter jar (this may, or may not have happened previously), but I wanted to make a good, nutrient dense, low-fat choice.

I pulled mashed yams out of the freezer – sold by Trader Joe’s.  The bag contains frozen “pucks” of cooked sweet potatoes and you simply reheat as little or as many as you need. Genius.  Then, I grabbed the frozen chopped kale, also a Trader Joe’s item.   And lastly, thank you Trader Joe’s – the frozen brown rice.  I threw all these items with some water in a pan and had lunch in 5 minutes.  I seasoned it with some hot sauce, Bragg’s Liquid Aminos, lemon juice, sea salt and pepper.  I was ready to eat in literally 5 minutes.  Not only was it quick, and healthy with no fat, it was GOOD!  Since I was basically delirious from hunger while preparing it, I didn’t measure or really even pay attention to amounts used.  I will do my best to recount the details in the recipe here, so that you too can have a super quick and healthy meal next time you’re in starvation mode.  It would be difficult to screw this dish up so play with it and enjoy! 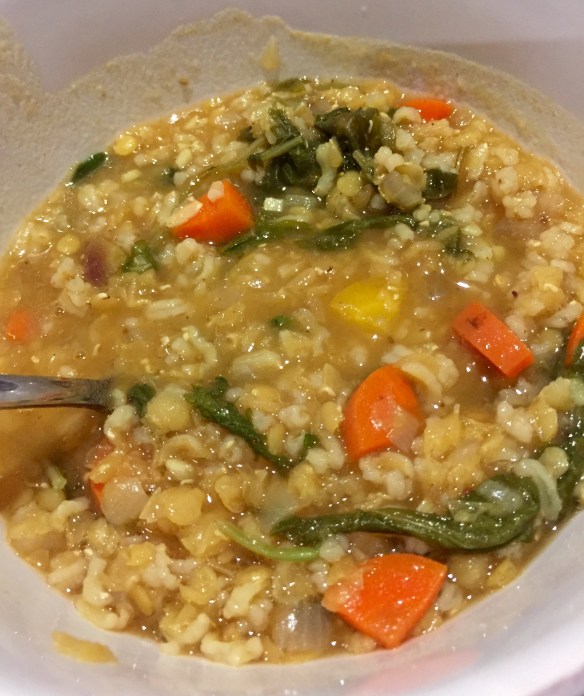 I’ve been sitting here racking my brain trying to think of what to write for my first blog post. I mean, let’s face it, bloggers are a dime a dozen these days.  Actually, I don’t even want to refer to myself as a blogger.  I blog.  Occasionally.  Posting recipes is the main goal here but I also want to share thoughts, tips, articles, and anything else I think you may find even the slightest bit interesting, as it relates to food and health (I won’t be sharing sad stories of my dog who’s lost her mind, how much I love my kid, my favorite TV shows or my thoughts on politics – no way, definitely not going there!)  Some blog posts go on for what seems like days, resembling a journal or diary, with every thought in the author’s head no longer a mystery.  I don’t want to replicate that here. I also don’t want to hammer you with posts 8 days a week.   I know the marketing gurus would say it’s important to really put yourself out there, but who cares. Less is more, that’s how I see it.  Bottom line is this:  I love food, and what I know healthy food does for the body (from first-hand experience, as well as what is clearly shown in the scientific literature).  Hopefully I can impart some of my passion and knowledge on to you!  Following is one of my favorite recipes.  Enjoy!

NOTE: Some brands of chipotle in adobo sauce contain a little wheat flour.  Make sure to check the label.  If you are on a strict gluten-free diet, use chipotle powder or chipotle hot sauce instead to make it officially gluten-free.