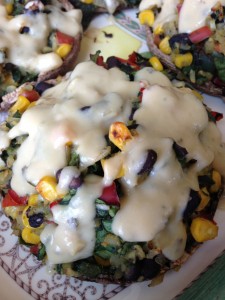 A few weeks ago Engine 2 (Rip Esselstyn’s baby) announced they would be conducting a recipe contest.  The entries had to include at least one ingredient from the Engine 2 line of foods (available at Whole Foods – try them if you haven’t!), be plant-based (duh), oil-free, low-fat and low-sodium.  I was familiar with the line of foods they offered and immediately got the idea for a recipe to enter into the contest.  It was announced today that my recipe was chosen as the Grand Prize Winner!!  http://engine2diet.com/the-daily-beet/  So fun and exciting!

The folks at E2 will be sharing this recipe with their readers, and I am sharing it now with you.  It’s very easy, and delicious! Enjoy!

So, I bought 2 acorn squash to decorate my Thanksgiving table and they’ve been sitting on my kitchen counter ever since.  I finally decided to cut those bad boys open and do something with them.  What a favorable result!!!  If you are pressed for time, this isn’t the best dish to make, unless you omit the gravy….then it’s not bad.  The gravy on it’s own isn’t time consuming or difficult, but if you stick it in with the other steps for the squash, it adds up.

*If you’ve ever cut a raw acorn squash before, you know how difficult it can be. To make this process easier, next time I will roast the squash whole first, for maybe 10 minutes, then cut it in half, and finish cooking.  Not sure if 10 minutes is the magic number but the squash would have to be softer than when they went in!  Give it a try.  Without this step, the squash takes about 35 minutes to cook.  I prefer scooping out the seeds and stringy stuff after its cooked – it comes out much easier that way. 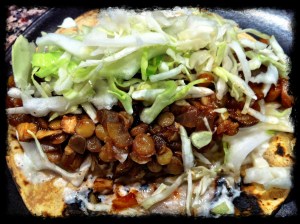