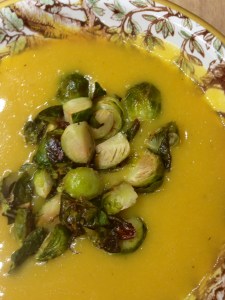 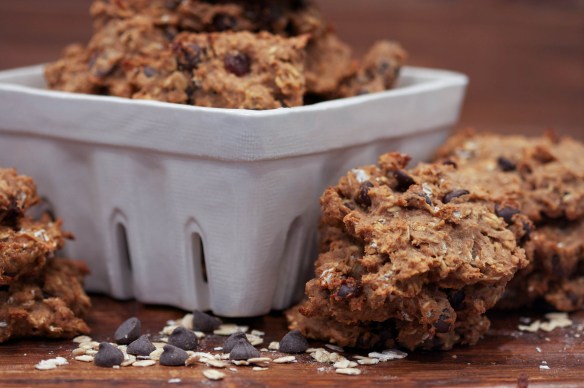 Sweetened with fruit, the whole fruit, and nothing but the fruit, so help me God!  These oatmeal cookies almost shouldn’t be called cookies because they are good for you!  The sweetness in these babies comes from banana, applesauce and date paste, as well as raisins and, as a treat, a few chocolate chips.  Of course if you add chocolate chips, that changes things, but the heart of the cookie will still be super healthy.  Be aware these are only slightly sweet.  They are perfect for our family as our palettes have adjusted to less sugar/sweets (which can happen for everyone – just takes patience!).  If you aren’t there yet, you may want to add more raisins and/or chocolate chips, or more date paste.

**Date paste is made by soaking whole, pitted dates until soft and much of the water is absorbed, and pureeing in food processor or blender until smooth.  Here’s how: 1) Soak 1/2 lb dates with 1/2 cup water several hours, until much of the water is absorbed.  2) Use food processor or blender to create a creamy, smooth paste.  Store in freezer (it doesn’t get hard!) and use in baked goods such as this one, as a fruit spread etc.  Chef AJ has many recipes using dates in her great book Unprocessed. 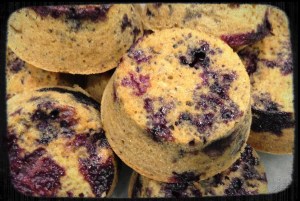 These muffins are very similar to my Sunshine Muffins, with a few small changes, and the addition of blueberries and poppy seeds – yummy.  I have only used fresh blueberries in this recipe but frozen (thawed) would work too.  These go VERY quickly in my house.

I have always LOVED tapioca pudding. Actually, any type of pudding – I don’t discriminate!   Once I gave up health-harming dairy and animal foods however (best choice I ever made, btw), I figured tapioca pudding was a thing of the past since the traditional recipe calls for milk and eggs.  WRONG! I tinkered with a few ingredients and ended up with what I feel is a great alternative.  I try my best not to consume or prepare things with refined sugar, but I must confess  – I did use some here, the few times I made this.  Next time I will try date or coconut sugar, which aren’t refined in the highly processed way white sugar is.  They may alter taste somewhat, and color, but it’s worth trying.

UPDATE!!! I tried date sugar and it was an epic fail.  I do NOT recommend it.  I also tried Sucanat, which is dried sugar cane juice.  Much better result than date sugar but not nearly as good as white sugar.  It gave it a tan hue, and sort of a molasses flavor, which tastes nice but the texture ends up much thicker and not as creamy as white sugar. Next I will try raw/turbinado sugar, which I’m guessing will have the same result as Sucanat.   When choosing white sugar, organic is a must!  Not only is it free of pesticides, it is vegan.  Why do you care about vegan sugar?  Well, regular, refined white sugar requires the use of animal bone char in processing.  Gross?  Definitely.  Due to health concerns, the FDA prohibits the use of bones from the United States’ meat industry. Further, the bones are required to come from animals that die of natural causes. While this makes theoretical sense, the ridiculous reality is bone char is predominantly imported from countries like Brazil, India, Pakistan and Nigeria and there is no warranty to the American consumer that the bone char used is indeed from ‘clean’ animals.  I don’t know about you, but I like my sugar without potentially contaminated bone char!